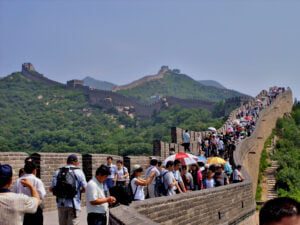 Nineteen walls have been built that were called the Great Wall of China. The first was built in the 7th century BC. The most famous wall was built between 226–200 BC by the first Emperor of China, Qin Shi Hong (Qin Pronounced as Chin), during the Qin Dynasty. Not much of this wall remains as people have been stealing from it. It was much farther north than the current wall. The current wall was built during the Ming Dynasty. Image by M15t3r Dr4g0n from Pixabay