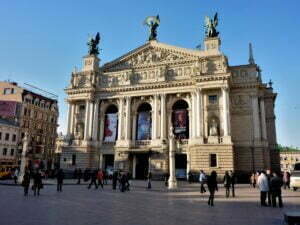 The Lviv Opera, also known as the Solomiya Krushelnytska Lviv State Academic Theater of Opera and Ballet, is a theater in Lviv, Ukraine’s largest western city and one of Poland’s and Ukraine’s ancient cultural centers. The Lviv Opera is today located on Freedom Avenue, the tree-lined heart of Lviv’s ancient Old City, a UNESCO World Heritage Site in the city’s Halych district. It was originally built on the marshes of the drowned Poltva River. According to an inscription in the lobby, the structure was built between 1897 and 1900. It was created while Lviv was the capital of the autonomous province of Galicia in the Austro-Hungarian Empire and has survived various changes in history. The first location of the Lviv Opera was at the end of Archduke Karl Ludwig Avenue. During the Soviet era, spectators entering the theater would pass past a towering statue of Vladimir Lenin, which was eventually renamed the Grand Theater of the Second Polish Republic. The Ivan Franko Lviv State Academic Theater of Opera and Ballet was renamed in 1956 on the centennial of the city’s famed poet and political activist’s birth, and remained thus for four decades. The Lviv Opera was renamed after one of the city’s local daughters, Solomiya Krushelnytska, a renowned singer of the early twentieth century, in 2000, to commemorate its own centennial. Image by Ferad Zyulkyarov is licensed under CC BY 2.0.