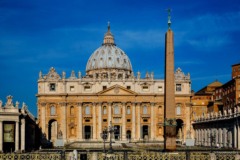 Basilica San Pietro, also called Saint Peter’s Basilica, is a Renaissance-style church in Vatican City, which is part of the city of Rome, Italy. It is the St. Peter’s Basilica in the Vatican. It was first planned by Pope Nicholas V and then by Pope Julius II to replace the old Old St. Peter’s Basilica, which Roman Emperor Constantine the Great had built in the fourth century. The building of the current basilica began on April 18, 1506. It was finished on November 18, 1626. Image by Lorenzo is licensed under CC BY-NC-ND 2.0