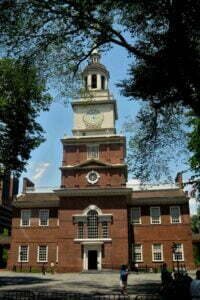 Independence Hall, on Chestnut Street between 5th and 6th Streets, was built by Edmund Woolley and Andrew Hamilton, the Speaker of the Pennsylvania Assembly, in 1753 as the Pennsylvania State House. But it was the events that took place between 1775 and 1787 that earned it the name Independence Hall, and reinforce its iconic status as the Birthplace of the Nation. It is within its walls that the delegates to the Second Continental Congress met, the Declaration of Independence was approved, and the Constitution of the United States was debated, drafted and signed. Philadelphia – Old City: Independence Hall by wallyg is licensed under CC BY-NC-ND 2.0