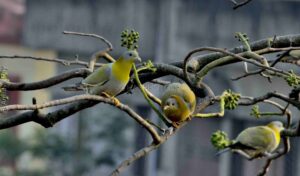 Yellow-footed Green Pigeon (Treron phoenicoptera), also known as yellow-legged green pigeon, is a common species of green pigeon found in the Indian subcontinent. It is the state bird of Maharashtra. In Marathi it is called Hariyal.

The species feeds on fruit, including many species of Ficus. They forage in flocks. In the early morning they are often seen sunning on the tops of emergent trees in dense forest areas. They especially are found sitting in couples on tree branches. Yellow-footed Green Pigeon feeds on fruits common fruits, nuts, seeds and some edible seeds also. They dwell in trees and occupy a variety of wooded habitats. Members of this genus can be further grouped into species with long tails, medium-length tails, and wedge-shaped tails. Most species of green pigeon display sexual dimorphism, where males and females can be readily distinguished by different colored plumage.