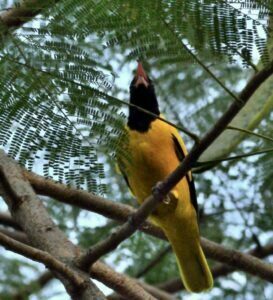 Black-hooded Oriole (Oriolus xanthornus) is a member of the oriole family of passerine birds and is a resident breeder in tropical southern Asia from India and Sri Lanka east to Indonesia. It is a bird of open woodland and cultivation. The nest is built in a tree, and contains two eggs. Its food is insects and fruit, especially figs, found in the tree canopies where they spend much of their time. The male is striking, with the typical oriole black and yellow coloration. The plumage is predominantly yellow, with a solid black hood, and black also in the wings and tail center. The female black-hooded oriole is a drabber bird with greenish underparts, but still has the black hood. Young birds are like the female, but have dark streaking on the underparts, and their hood is not solidly black, especially on the throat. The black head of this species is an obvious distinction from the Indian golden oriole, which is a summer visitor to northern India. Orioles can be shy and even the male may be difficult to see in the dappled yellow and green leaves of the canopy. The black-hooded oriole’s flight is somewhat like a thrush, strong and direct with some shallow dips over longer distances. The black hooded oriole lives in common contact with humans in rural and urban India. A folk tale from Bengal has it that an unfortunate girl of a merchant family was tortured by her mother-in-law. Troubled by various incidents she smeared herself with turmeric paste and covered herself with a sooty earthen pot and killed herself. A goddess resurrected her as a black hooded oriole and a Bengali name for the bird is বেনেবউ or merchant’s wife while another name is ইষ্টিকুটুম or turmeric bird.