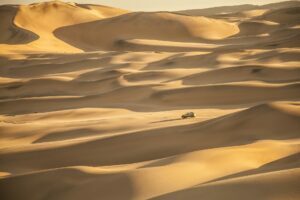 Namib Desert. The Namib is almost completely uninhabited by humans except for several small settlements and indigenous pastoral groups, including the Ovahimba and Obatjimba Herero in the north, and the Topnaar Nama in the central region. Owing to its antiquity, the Namib may be home to more endemic species than any other desert in the world. Most of the desert wildlife is arthropods and other small animals that live on little water, although larger animals inhabit the northern regions. Near the coast, the cold ocean water is rich in fishery resources and supports populations of brown fur seals and shorebirds, which serve as prey for the Skeleton Coast’s lions. Further inland, the Namib-Naukluft National Park, the largest game park in Africa, supports populations of African bush elephants, mountain zebras, and other large mammals. Although the outer Namib is largely barren of vegetation, lichens and succulents are found in coastal areas, while grasses, shrubs, and ephemeral plants thrive near the escarpment. Several types of trees are also able to survive the extremely arid climate. Image by Pixabay