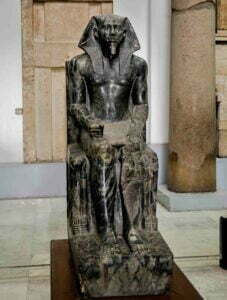 Khafre Statue. Khafre was an ancient Egyptian king of the 4th Dynasty during the Old Kingdom. He was the son of Khufu and the successor of Djedefre. According to the ancient historian Manetho, Khafre was followed by king Bikheris, but according to archaeological evidence he was instead followed by king Menkaure. Egyptian Museum Cairo. Diorite statue of King Khafre (Chephren). Old Kingdom, Giza; 4th Dynasty; reign of Chephren. Egyptian Museum Cairo by kairoinfo4u is licensed under CC BY-NC-SA 2.0