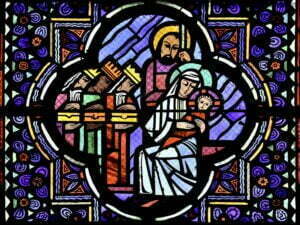 Amiens Cathedral Stained Glass. They show a clergyman presenting the stained glass to the Virgin Mary, to whom the chapel is dedicated. Angels carry crowns which they hold over the heads of the elongated figures. Only a few of the original stained glass windows still remain; many were removed during the remodeling of the Cathedral in the 18th century. Others were destroyed when the church was sacked by the Protestant Huguenots in 1561, by hurricanes in 1627 and 1705; by the explosion of a powder mill in 1675. Image by Lawrence OP is licensed under CC BY-NC-ND 2.0