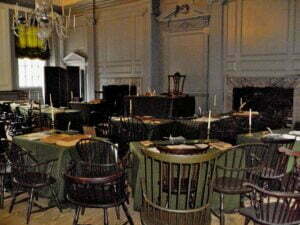 Independence Hall Inside. Philadelphia, Pennsylvania. Where the Declaration of Independence was signed. During the War of Independence the British twice attacked Philadelphia. The Continental Congress which was meeting there fled to Baltimore and General George Washington defeated the English at the battles of Trenton and Princeton. The British attacked again in 1777 and then the Continental Congress fled to Lancaster; Washington was beaten at the Battle of Brandywine (near Wilmington) and the citizens of Philadelphia fled. The French helped the Americans drive the English out 10 months later! Some of the old cobblestone streets that would have witnessed this drama still exist in Philadelphia. The Historic City area was declared a National Monument in 1972. Independence Hall Philadelphia. Where the Declaration of Independence was signed. by denisbin is licensed under CC BY-ND 2.0