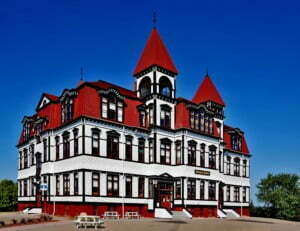 The Lunenburg Academy is an old school building in the Canadian city of Lunenburg, Nova Scotia. In 1895, the building was built to replace one that had burned down. The academy was a school from 1895 until 2012, when it was taken over by the Town of Lunenburg. It was named a National Historic Site in 1983 because of its unique Second Empire style and how it shows how Nova Scotia’s education system worked in the 1800s. As of 2019, the building houses a library and a music school, and restoration work is still going on. Image by Wladyslaw is licensed under CC BY-SA 3.0