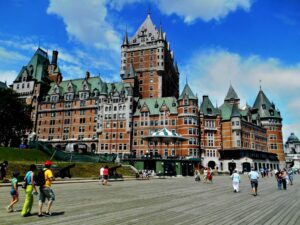 The Chateau Frontenac, also known as the Fairmont Le Chateau Frontenac, is a historic hotel in Quebec City, Quebec, Canada. The hotel is in Old Quebec, on the south side of Place d’Armes. It is in Upper Town, which is part of the historic district. Bruce Price made the plans for the Chateau Frontenac, which were built by the Canadian Pacific Railway company. Fairmont Hotels and Resorts is in charge of running the hotel. The 18-story Chateauesque building opened in 1893. It stands on a 54-meter (177-foot) hill, which adds to its 79.9-meter (262-foot) height. It was one of the first grand railway hotels to be built, and in 1981, it was named a National Historic Site of Canada. There have been three major additions to the hotel, with the most recent one being in 1993. Image by Jeangagnon is licensed under CC BY-SA 3.0

Author: Amitava Ray
I'm a photographer (1979) and a blogger (2006). My future photography and blogging endeavors are contingent on the success of Whizzed Net.
Ads Infolinks

Copyright © 2019—2023 All Rights Reserved by Whizzed Net
Design by ThemesDNA.com