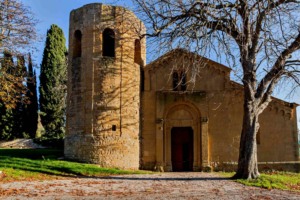 Pieve di Corsignano is a small Romanesque stone church from the 12th century. This Romanesque church is on the western edge of the city of Pienza in Italy. It was built when Pienza was called Corsignano, many centuries ago. Both Popes Pius II and Pius III were baptized there. It has a strange bell tower that is round and has eight arched windows. A siren with two heads is carved above the main door. There are carvings of the Three Kings and the Nativity above the side door on the right. Inside the church is where Pope Pius II was baptized. Address: Piazza Dante Alighieri, 29, 53026 Pienza SI, Italy. Image by Mirella Bruni is licensed under CC BY-NC 2.0.