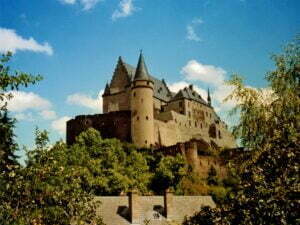 Vianden Castle, located in Vianden in the north of Luxembourg, is one of the largest fortified castles west of the Rhine. With origins dating from the 10th century, the castle was built in the Romanesque style from the 11th to 14th centuries. Gothic transformations and trimmings were added at the end of this period. Image by Alun Salt is marked with CC BY-SA 2.0.