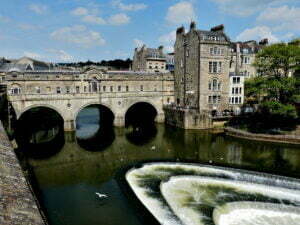 Bath is the largest city in the county of Somerset, England, known for and named after its Roman-built baths. In 2011, the population was 88,859. Bath is in the valley of the River Avon, 97 miles west of London and 11 miles southeast of Bristol. Image by Falco from Pixabay