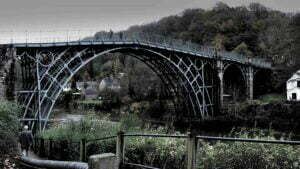 The Ironbridge Gorge World Heritage property covers an area of 5.5 km2 (550 ha) and is located in Telford, Shropshire, approximately 50 km north-west of Birmingham. The Industrial Revolution had its 18th century roots in the Ironbridge Gorge and spread worldwide leading to some of the most far-reaching changes in human history. The Iron Bridge crosses the River Severn at the Ironbridge Gorge, by the village of Ironbridge, in Shropshire, England. It was the first arch bridge in the world to be made out of cast iron, a material which was previously far too expensive to use for large structures. However, a new blast furnace nearby lowered the cost and so encouraged local engineers and architects to solve a long-standing problem of a crossing over the river. Image of Ironbridge by Leigh984 is licensed under CC BY-NC-SA 2.0