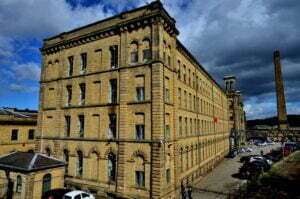 Saltaire is a Victorian model village in Shipley, part of the City of Bradford Metropolitan District, in West Yorkshire, in the United Kingdom of Great Britain and Northern Ireland, and became a UNESCO World Heritage Site in 2001. Sir Titus Salt, a businessman who made textiles from alpaca wool, set it up in 1853 as a model village for his workers. The hamlet was built next to big woollen mills along the Leeds and Liverpool Canal. It was named for its founder, Salt, and for the river nearby, Aire. Its strong row houses are still there. Shipley, which is an industrial and residential suburb of Bradford, is the closest large modern town. Image by Rum Bucolic Ape is licensed under CC BY-ND 2.0.