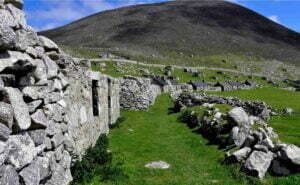 Hirta is the largest island in the St Kilda archipelago, on the western edge of Scotland. The names Hiort and Hirta have also been applied to the entire archipelago. This Scottish island, part of the United Kingdom of Great Britain and Northern Ireland, became a UNESCO World Heritage Site in 1986. Image by Rhonda Surman is licensed under CC BY-NC-ND 2.0.