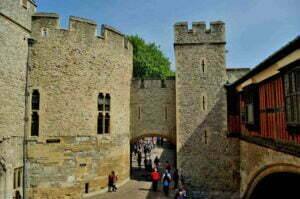 Wakefield Tower was named after William of Wakefield in 1344. It is the second largest tower in the Tower of London complex and its walls are much thicker than the other towers as it was built by Henry III to house his private apartments and to protect the inmost ward. Built between 1222 and 1240. Wakefield Tower by gnatallica is licensed under CC BY-NC-ND 2.0