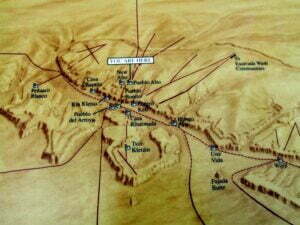 Chaco Canyon Map. This is a map of Chaco Canyon that is situated atop the butte near Pueblo Alto. When looking at the map, Chaco Canyon’s strategic location is apparent, as it seems to be the corridor to the north. The lines here are known Chaco roads, the dotted lines are suspected connections among these roads. Pueblos from Chaco Canyon seen in this collection are Una Vida, Hungo Pavi, Chetro Ketl, Pueblo Bonito, Pueblo del Arroyo, Kin Klesto, Pueblo Alto, and New Alto. We had ambitions to get to Penasco Blanco and the petroglyphs that lie just before it, but we got a late start to the day. Chaco Canyon Map by Travis S is licensed under CC BY-NC 2.0