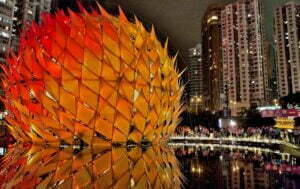 Vietnam Lanterns. Vietnam lantern festival. The Mid-Autumn Festival (中秋節) is a popular harvest festival celebrated by Chinese and Vietnamese people. The festival is held on the 15th day of the eighth month in the Chinese calendar, during a full moon, which is in September or early October in the Gregorian calendar, close to the autumnal equinox. It is a public holiday in Taiwan and Hong Kong. Among the Vietnamese, it is considered the second most important holiday tradition. A notable part of celebrating the holiday is the carrying of brightly lit lanterns, lighting lanterns on towers, or floating sky lanterns. One tradition involving lanterns is to write riddles on lanterns and have other people try to guess the answers. It is difficult to discern the original purpose of lanterns in connection to the festival, but it is certain that lanterns were not used in conjunction with moon-worship prior to the Tang Dynasty. Traditionally, the lantern has been used to symbolize fertility, and functioned mainly as a toy and decoration. But today the lantern has come to symbolize the festival itself. In the old days, lanterns were made in the image of natural things, myths, and local cultures. Over time, a greater variety of lanterns could be found as local cultures became influenced by their neighbors. As China gradually evolved from an agrarian society to a mixed agrarian-commercial one, traditions from other festivals began to be transmitted into the Mid-Autumn Festival, such as the putting of lanterns on rivers to guide the spirits of the drowned as practiced during the Ghost Festival, which is observed a month before. Hong Kong fishermen during the Qing Dynasty, for example, would put up lanterns on their boats for the Ghost Festival and keep the lanterns up until Mid-Autumn Festival. In Vietnam, children participate in parades with lanterns of various forms and colors. Traditionally, lanterns signified the wish for the sun’s light and warmth to return after winter. In addition to carrying lanterns, the children also don masks. Elaborate masks were made of papier-mâché, though it is more common to find masks made of plastic nowadays. Handcrafted shadow lanterns were an important part of Mid-Autumn displays since the 12th-century Ly dynasty, often of historical figures from Vietnamese history. Handcrafted lantern-making declined in modern times due to the availability of mass-produced plastic lanterns, which often depict internationally recognized figures such as Pokemon’s Pikachu and Hello Kitty. This is one of the biggest lantern I have seen. It was one of many displayed at the Mid-autumn Festival, Victoria Park, Hong Kong. The lantern meant to depict the shape of a durian fruit. Photo by Alcuin Lai is licensed under CC BY-NC-SA 2.0