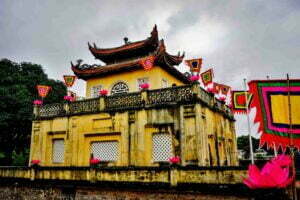 The Ly Viet Dynasty built the Thang Long Imperial Citadel in the 11th century to commemorate the Dai Viet’s independence. On drained ground reclaimed from the Red River Delta in Hanoi, it was built on the ruins of a Chinese fortification dating from the 7th century. Central Sector of the Imperial Citadel of Thang Long – Hanoi by katiebordner is licensed under CC BY 2.0