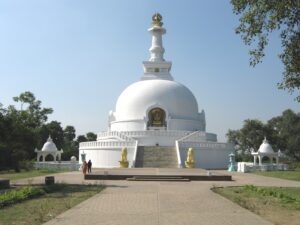 Vaishali or Vesali was a city in present-day Bihar, India, and is now an archaeological site. It is a part of the Tirhut Division. It was the capital city of the Vajjian Confederacy of Vrijji mahajanapada, considered one of the first examples of a republic around the 6th century BCE. Wikipedia Image by Wikimedia is licensed under CC BY 2.0