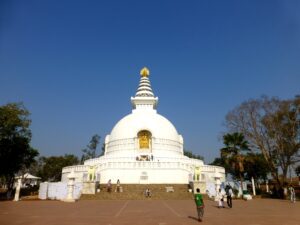 Vishwa Shanti Stupa is a large white stupa in Rajgir, Nalanda District, Bihar, near Gitai Mandir. Statues of the Buddha are mounted on stupa in four directions. It also has a small Japanese Buddhist temple with a large park. There is a temple near the stupa where prayers are conducted for universal peace. Wikipedia “Shanti Stupa” by Anandajoti is licensed under CC BY 2.0