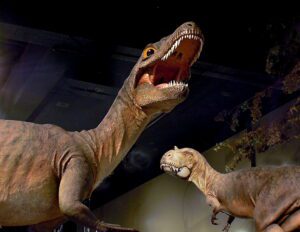 The Tyrannosaurus Rex was one of the largest and most dangerous animals that ever lived. It became extinct 65 million years ago. Even though Tyrannosaurus Rex is one of the most well-known dinosaurs, paleontologists have only discovered a small number of fossil specimens that are completely preserved. Paleontologists have unearthed the majority of T. Rex fossils have been discovered in the states of Montana and South Dakota, both located in the Northwest. Alberta, Canada is another location where fossils of T. Rex has been discovered. The time period known as the Late Cretaceous, which lasted from around 90 to 66 million years ago, is when the T. Rex lived. Image by Bernard Spragg is marked with CC0 1.0.