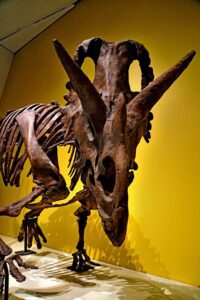 Wendiceratops is a genus of herbivorous centrosaurine ceratopsian dinosaurs that lived in Canada during the Late Cretaceous period. Wendy Sloboda, a Canadian fossil hunter, discovered a centrosaurine bonebed in the Pinhorn Provincial Grazing Reserve south of the Milk River in the County of Forty Mile No. 8, Alberta, in 2010. A team from the Royal Tyrrell Museum visited the site in 2011 and began excavating fossils. The following year, a substantial overburden was removed. Numerous fossils were discovered in 2013 and 2014. Wendiceratops pinhornensis was named and described by paleontologists David Evans and Michael Ryan in 2015. The generic name combines a nod to Wendy Sloboda with a Latinized Greek ceratops, which means “horn face.” The specific name refers to the Pinhorn Reserve’s provenance. In 2015, Wendiceratops became the second ceratopsian to be discovered and named. The discovery of this new horned dinosaur species—from the ground in Alberta to scientific study and restoration, and finally reconstruction and public display in The Royal Ontario Museum (ROM)—was documented in the HISTORY series and companion website, Dino Hunt Canada. Image by Dennis Jarvis is licensed under CC BY-SA 2.0.