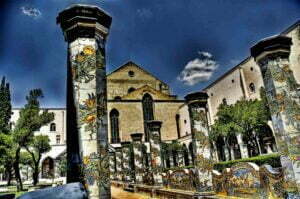 Santa Chiara is a religious complex in Naples, Italy, that includes the Church of Santa Chiara, a monastery, tombs and an archeological museum. The Basilica church of Santa Chiara faces Via Benedetto Croce, which is the easternmost leg of Via Spaccanapoli. Majolica Columns of Santa Chiara was first begin by Robert of Anjou n 1310 and was subsequently used by Angevin rulers as a site for their tombs. This shot from the inner cloister features 72 octogonal pillars decorated with majolica tiles painted by Donato and Giuseppe Massa. Image by Trey Ratcliff is licensed under CC BY-NC-SA 2.0.