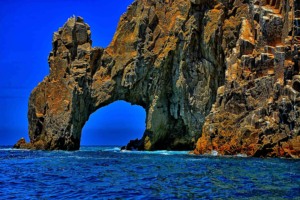 El Arco de Cabo is where the Pacific Ocean meets the Gulf of California. El Arco de Cabo, also known as the Arch of Cabo San Lucas, is a unique rock formation at the southern tip of Cabo San Lucas, which is at the end of the Baja California Peninsula in Mexico. The arch is called “El Arco,” which means “the arch” in Spanish, or “Land’s End” by the people who live near it. Image by Kirt Edblom is licensed under CC BY-SA 2.0.