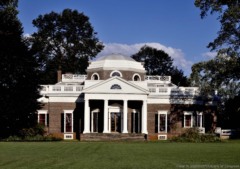 Thomas Jefferson, the third president of the United States and a Founding Father, used Monticello as his main plantation. He started building Monticello when he was 26 and got land from his father. The plantation was originally 5,000 acres (20 km2) and was near Charlottesville, Virginia, in the Piedmont region. Jefferson grew a lot of tobacco and other crops on the plantation with the help of African slaves. As markets changed, he switched from growing tobacco to growing wheat. The building is a National Historic Landmark because of how it looks and how important it is historically. In 1987, both Jefferson’s Monticello and the nearby University of Virginia, which he also designed, were named UNESCO World Heritage Sites. On the back of the current nickel, a United States coin, there is a picture of Monticello. Image by US Department of State is licensed under CC BY-NC 2.0. Photo credit: GPA Photo Archive / Carol M. Highsmith / Library of Congress