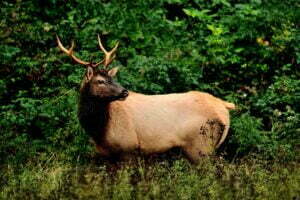 The Roosevelt elk, also known commonly as the Olympic elk and Roosevelt’s wapiti, is the largest of the four surviving subspecies of elk in North America by body mass, although by antler size, both the Boone and Crockett and Pope and Young records have Rocky Mountain elk being larger. || The race of elk we have in the Pacific Northwest, Roosevelt elk, were named in honor of Theodore Roosevelt. I came across this bull, part of a larger herd, on a rainy morning near the Hoh Rain Forest in Olympic National Park. I wish I had photographed it with a slightly wider lens. While President Cleveland protected some of the forests of the Olympic Peninsula in 1897 by declaring an Olympic Forest Reserve, the protection did not extend to the elk who lived there and in a few years less than 2,000 survived. President Roosevelt (Theodore, not Franklin) established the Mount Olympus National Monument in 1909 to protect the elk but future politicians cut back the acreage to half of its original size. President Roosevelt (Franklin, not Theodore) granted National Park status in 1938 after visiting the area, the status it has retained to the current day, protecting not only the elk that bear the Roosevelt name but also the many plants and animals that are unique to the Olympic Peninsula. You can find more info about the history of the park in a PDF on the official park site. Roosevelt by rickcameron is licensed under CC BY-NC-ND 2.0