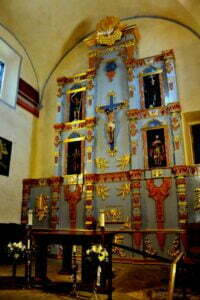 Misión San José y San Miguel de Aguayo was established in 1720, founded by Father Antonio Margil. The church, which is still standing, was constructed in from 1758 to 1782 and quickly became known as the “Queen of the Missions”. The mission lands were given to the Coahuiltecan Indians in 1794, with mission activities ending in 1824. Restored as part of the WPA, today the mission is an active parish staffed by the Order of Friars Minor. San Antonio Missions National Historical Park is a National Historical Park and part of a UNESCO World Heritage Site preserving four of the five Spanish frontier missions in San Antonio, Texas, USA. These outposts were established by Catholic religious orders to spread Christianity among the local natives. These missions formed part of a colonization system that stretched across the Spanish Southwest in the 17th, 18th, and 19th centuries. In 2015, the San Antonio Missions National Historical Park, along with the Alamo Mission in San Antonio, was designated a UNESCO World Heritage site. “San Antonio: Mission San Jose – Chapel” by wallyg is licensed under CC BY-NC-ND 2.0