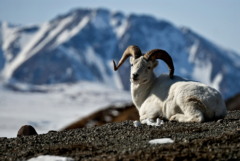 The Dall Sheep, scientifically known as Ovis dalli dalli, are native to the mountain areas of Alaska. The males of these white animals stand out because of their huge, curled horns. The females, which are called “ewes,” also have horns, but they are shorter, thinner, and only slightly curved. Until they are about 3 years old, rams tend to look a lot like ewes. After that, the males are easy to spot because their horns keep growing. During the spring, summer, and early fall, horns grow steadily. Horn growth slows and eventually stops in the late fall or winter. This makes a pattern of rings called annuli along the length of the horn that can be used to figure out how old the animal is. People have seen Dall rams that were 16 years old and ewes that were 19 years old. In general, though, a sheep that is 12 years old is pretty old. Image by NPS/ K. Thoresen is licensed under Public Domain Mark 1.0