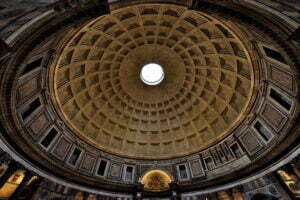 Inside the Pantheon, there are no windows besides the large oculus. The tombs of several Italian kings and poets, as well as the famous artist Raphael, are now in the Pantheon. The design on the marble floor, which is made up of a series of geometric shapes, is still the same as the ancient Roman version. On the inside of the Pantheon are tombs and chapels. Three of them are tombs. One is where the great artist Raphael is buried, and the other two are where the kings of unified Italy are buried. One of them is Vittorio Emanuele, who is known as the “Father of the Nation” and whose tomb is often guarded by a volunteer. Image by Egisto Sani is licensed under CC BY-NC-SA 2.0