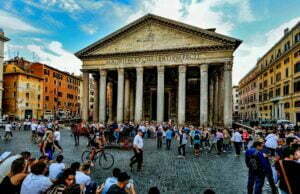 The Pantheon is a former Roman temple and since the year 609 a Catholic church, in Rome, Italy, on the site of an earlier temple commissioned by Marcus Agrippa during the reign of Augustus. It was rebuilt by the emperor Hadrian and probably dedicated c. 126 Image by user32212 from Pixabay