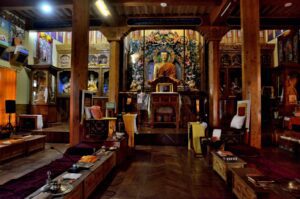 Tabo Monastery or Tabo Chos-Khor Monastery is located in the Tabo village of Spiti Valley, Himachal Pradesh, northern India. It was founded in 996 CE in the Tibetan year of the Fire Ape. by the Tibetan Buddhist lotsawa (translator) Rinchen Zangpo (Mahauru Ramabhadra), on behalf of the king of western Himalayan Kingdom of Guge, Yeshe-Ö. Tabo is noted for being the oldest continuously operating Buddhist enclave in both India and the Himalayas. A large number of frescoes displayed on its walls depict tales from the Buddhist pantheon. There are many priceless collections of thangkas (scroll paintings), manuscripts, well-preserved statues, frescoes and extensive murals which cover almost every wall. The monastery is in need of refurbishing as the wooden structures are aging and the thangka scroll paintings are fading. After the earthquake of 1975, the monastery was rebuilt, and in 1983 a new Du-kang or Assembly Hall was constructed. It is here that the 14th Dalai Lama held the Kalachakra ceremonies in 1983 and 1996. The monastery is protected by the Archaeological Survey of India, as a national historic treasure of India.