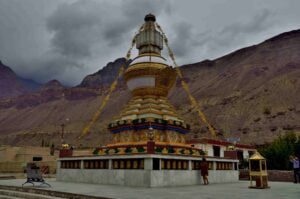 Tabo monastery is situated in the Spiti valley (an isolated valley with a total population of 10,000) above Tabo village on the left bank of the Spiti River. The valley as such is delimited by Ladakh in the north, Lahaul and Kullu districts in the west and south-east respectively, and by Tibet and the Kinnaur district in the east. While Tabo village is in a bowl-shaped flat valley, the monastery is also in the bottom of the valley, unlike other monasteries in the valley, which are perched on hills; in the past the region was part of Tibet.It is located in a very arid, cold and rocky area at an altitude of 10,010 feet. Above the monastery there are a number of caves carved into the cliff face and used by monks for meditation. There is also an assembly hall in the caves and some faded paintings on the rock face.