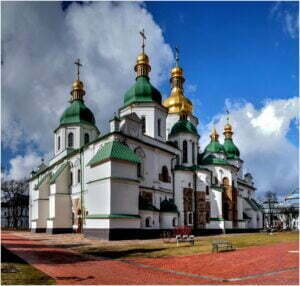 The Saint Sophia Cathedral in Kyiv, Ukraine, is a Kyivan Rus architectural monument. Along with the Kyiv Cave Monastery complex, the ancient cathedral is one of the city’s most well-known structures and the first heritage site in Ukraine to be included on the World Heritage List. Aside from the main edifice, the cathedral has an ensemble of supporting structures, including a bell tower and the Metropolitan House. The historic site was transferred from the Ministry of Regional Development of Ukraine to the Ministry of Culture of Ukraine in 2011. One of the reasons for the change was that the UNESCO World Heritage Program recognizes both Saint Sophia Cathedral and Kyiv Pechersk Lavra as one complex, whereas the two were previously administered by separate government organisations in Ukraine. Currently, it serves as a museum. Image by Bert Kaufmann is licensed under CC BY-NC 2.0.