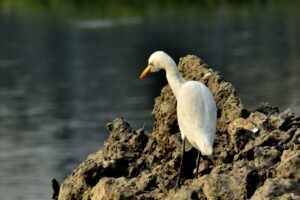 Little Egret (Egretta garzetta) is a species of small heron in the family Ardeidae. It is a white bird with a slender black beak, long black legs and, in the western race, yellow feet. As an aquatic bird, it feeds in shallow water and on land, consuming a variety of small creatures. It breeds colonially, often with other species of water birds, making a platform nest of sticks in a tree, bush or reed bed.

A clutch of bluish-green eggs is laid and incubated by both parents. The young fledge at about six weeks of age. Its breeding distribution is in wetlands in warm temperate to tropical parts of Europe, Africa, Asia, and Australia. A successful colonist, its range has gradually expanded north, with stable and self-sustaining populations. In warmer locations, most birds are permanent residents; northern populations, including many European birds, migrate to Africa and southern Asia to over-winter there. The birds may also wander north in late summer after the breeding season, and their tendency to disperse may have assisted in the recent expansion of the bird’s range. Little egrets are mostly silent but make various croaking and bubbling calls at their breeding colonies and produce a harsh alarm call when disturbed.