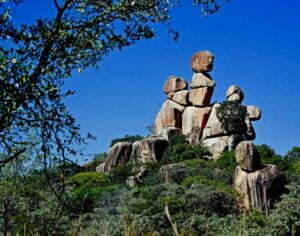 Matobo Hills Pictures, Kopje Zimbabwe. The landscape is characterized by extensive outcroppings of Precambrian rock, which is between about 570 million and 4 billion years old. The most ancient part of this rock formation, known as the basement complex, covers the greater part of the country. About four-fifths of the basement complex consists of granite; the Matopo (Matopos) Hills south of the city of Bulawayo are formed from prolonged erosion of an exposed granite batholith. Some of the hills are surmounted by formations, known as balancing rocks, that have been eroded by wind and water along regular fault lines, leaving some blocks precariously balanced upon others. Elsewhere are found innumerable small rounded granite hillocks known locally as kopjes. Belts of schist in the basement complex contain the veins and lodes of most of the country’s gold, silver, and other commercial minerals. Mother and Child Rock Balancing Rocks in Matopos National Park, Zimbabwe by Susan Adams is licensed under CC BY 2.0