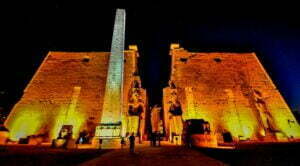 Luxor Temple is a large Ancient Egyptian temple complex located on the east bank of the Nile River in the city today known as Luxor and was constructed approximately 1400 BCE. It was one of the two primary temples on the east bank, the other being Karnak. Unlike the other temples in Thebes, Luxor temple is not dedicated to a cult god or a deified version of the pharaoh in death. Instead, Luxor temple is dedicated to the rejuvenation of kingship. It may have been where many of the pharaohs of Egypt were crowned in reality or conceptually. Image by Jorge Lascar is licensed under CC BY 2.0.