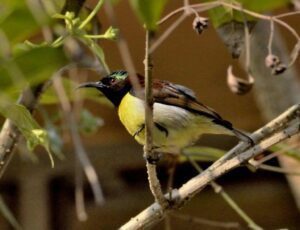 Purple Sunbird (Cinnyris asiaticus) মৌটুসী পাখি is a small sunbird. Like other sun-birds they feed mainly on nectar, although they will also take insects, especially when feeding young. They have a fast and direct flight and can take nectar by hovering like a hummingbird but often perch at the base of flowers. The males appear all black except in some lighting when the purple iridescence becomes visible. Females are olive above and yellowish below. This small sunbird has a relatively short bill, a dark and short square ended tail with distinctive sexual dimorphism. Less than 10 cm long they have a down-curve bill with brush-tipped tubular tongues that aid in nectar feeding. The male is glossy metallic bluish to purplish black on the upper parts with the wings appearing dark brown. The breeding male has the underparts also of the same purplish black, but non-breeding males may show a central streak of black on yellow underparts. In the breeding plumage, the male can be confused with the synoptic Loten’s sunbird which has a long bill and distinctive broad maroon band on the breast. Breeding males will sometimes show their yellow pectoral tufts in displays. There is a patch of bright blue on the shoulder of breeding males. The maroon shine on the feathers of the collar around the neck is visible mainly during the breeding seasons. Females are olive brown above with yellowish underside. There is a pale supercilium beyond the eye. There is a darkish eye stripe. The throat and breast are yellow becoming pale towards the vent. The outer tail feathers are tipped in white both in the male and female. They are seen in pairs or small groups and aggregations may be found in gardens with suitable flowers. They feed mainly on nectar but also take fruits and insects.

The purple sunbird (Nectarinia asiatica) is a small sunbird species with a slender, curved bill and a tubular tongue, which is well adapted for feeding on the nectar of flowers. The male purple sunbird has two distinct types of plumage. The breeding male is characterized by the metallic bluish-black body, and the tuft of crimson and yellow feathers under each wing. In contrast, the non-breeding male purple sunbird has a much duller ‘eclipse’ plumage that resembles the female, with yellow underparts and a dark line of feathers running down the center of the throat and breast. The female purple sunbird is greenish-brown with a bright yellow underside, a dark brown tail, and white tips on the outer feathers. A vocal species, the male purple sunbird perches on the top branch of a tree and delivers repetitions of a sharp chirp, followed by a loud song. This species is known to defend its territory by singing and chasing intruders.