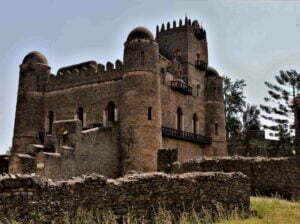 Fasilides Castle or the Fasil Ghebbi is a fortress located in Gondar, Amhara Region, Ethiopia. It was founded in the 17th century by Emperor Fasilides and was the home of Ethiopian emperors. Its unique architecture shows diverse influences including Nubian, Hindu, Arab, and Baroque characteristics. The Ethiopian city of Gondar, north of Lake Tana, is a former imperial capital. Founded by Emperor Fasilides in about 1635, Gondar was Ethiopia’s capital until 1855. Emperor Fasilides lived from 1603 to 1667, and reigned from 1632 until his death. During his reign, Fasilides succeeded in suppressing Roman Catholic institutions and operatives in Ethiopia that had flourished under his father, Emperor Susenyos. Facilides restored the power of the Ethiopian Orthodox Church, which had suffered under Susenyos. Fasilides was also preoccupied with putting down internal revolts by the Oromo and mounting punitive actions against the Agaw. Nonetheless, Emperor Fasilides was able to mount a major building campaign at Gondar, building a number of churches, his castle (pictured above) and seven stone bridges. During periods of instability, Gondar was repeatedly sacked, leaving most of the imperial buildings in a state of romantic ruin. The Ruins at Gondar, Ethiopia – Fasilides Castle by A.Davey is licensed under CC BY 2.0