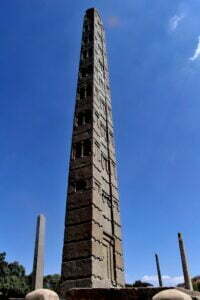 The Obelisk of Axum is a 4th-century CE, 24-metre tall phonolite stele, weighing 160 tonnes, in the city of Axum in Ethiopia. It is ornamented with two false doors at the base and features decorations resembling windows on all sides. The obelisk ends in a semi-circular top, which used to be enclosed by metal frames. Ethiopia Obelisk Axum by CharlesFred is licensed under CC BY-NC-SA 2.0