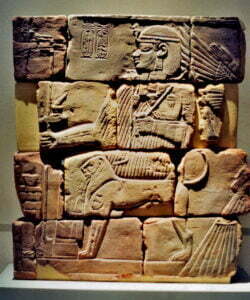 The Pyramids of Meroë are part of the larger group of Nubian pyramids, built at the time of the Kushite Kingdom over a period close to a millennium. Near Meroë, three royal cemeteries were constructed: South Cemetery features nine royal pyramids. Four of the pyramids belonged to Kings and five belonged to queens. Photographed December 2005, Relief from the chapel of king Amanitenmomide from Meroe, Berlin, Egyptian Museum, Inv. no. 2260. Wall of Meroe Pyramid by Julia Scherkunowa is licensed under CC BY-SA 2.0