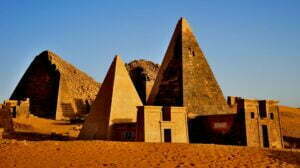 Nubian pyramids were built by the rulers of the ancient Kushite kingdoms. The area of the Nile valley known as Nubia, which lies within the north of present-day Sudan, was the site of three Kushite kingdoms during antiquity. The capital of the first was at Kerma. The second was centered on Napata. Sudan, Nubian pyramids by Ninara31 is licensed under CC BY 2.0