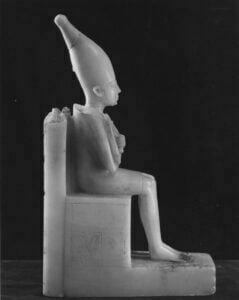 Pepi I Meryre was an Ancient Egyptian pharaoh, third king of the Sixth Dynasty of Egypt, who ruled for over 40 years at the turn of the 24th and 23rd centuries BC, toward the end of the Old Kingdom period. Image by Brooklyn Museum. Seated Statuette of Pepy I with Horus Falcon is licensed under CC BY 3.0